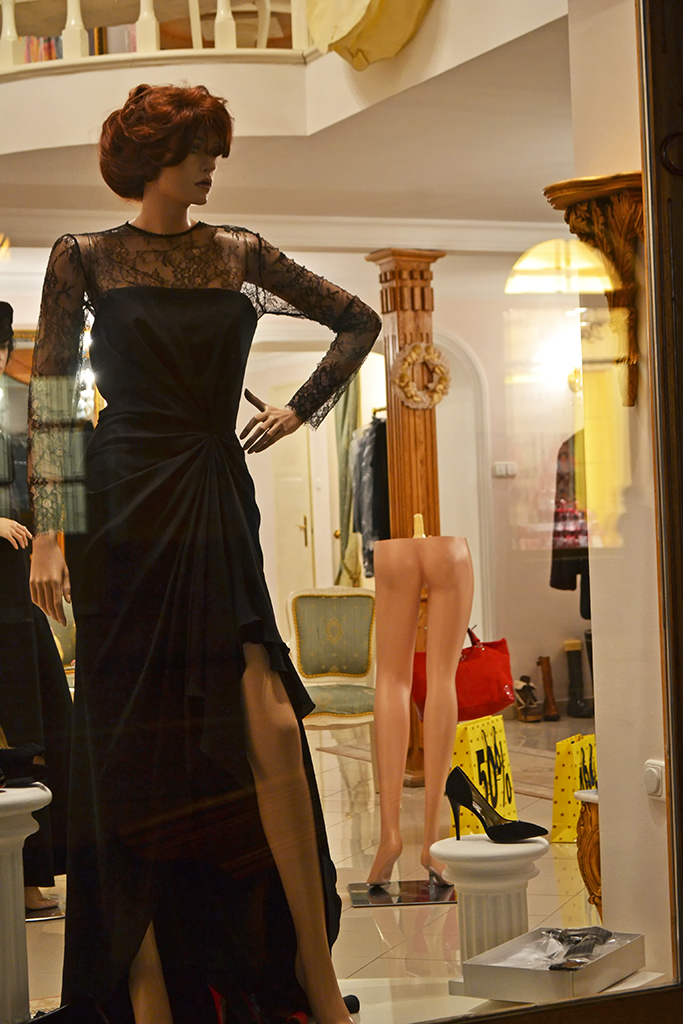 The story of the Doll Stories

This series started off in Szeged, Hungary. A fellow-student and I took a walk in the evening. I spotted a store window in which, a mannequin stood in contrapposto, her left hand unnaturally far from the hip, as if some invisible force stressed her arm out- and backwards. Behind her, in the well lit store, other mannequins stood, including one missing not only any clothes but also the upper half of her body.

The long black dress the mannequin in the front was wearing, with the whipped up, slit skirt and the lacy tulle arms and shoulders, radiated a kind of coquettish elegance. All that stood in a peculiar, disheveled harmony with the store interior, the beige walls and marble floor, the hazel pillarets and the caesious color of the golden-rimmed cushion and backrest of the chair in the background. A little bit overemphasized moderation that, in a way, gets mocked by the mahogany red wig, the hot red color of the bag and the flesh-colored limbs of the mannequins, as these forms and colours seem to uncover the concupiscent nature of reality, denouncing all mannerism. In this cheeky backchat, the half-mannequin deserves some special attention. With no torso, the bottom becomes all too important, it saves poor legs from losing all support. The plate denoting an 50% discount brings an element of humour into the picture. From this viewpoint, the objects arranged this way inside, it is not immediately clear which item is sold at half the original price. Maybe the half-doll, as it is a half. Maybe the shoe, as it is exactly the half of a pair. Or maybe the collection consisting of one bag, one shoe and a half doll.

An elegant store interior the photo of which, resulting from the circumstances, gains a bizarre aspect. But, to me, this picture means more than that. I haven’t posted the original pic so far, as it is far from being perfect. In lack of a tripod that night, the shot was taken hand-held which resulted in imperfect focus and clearly recognizable color noise. However, I experimented a lot with this image later, while contemplating the roles these often primitive, yet more and more sophisticated replicas have played throughout our culture. Our bonding with these creatures went so far that in our fantasies, we have vivified them, we have assigned human characteristics, emotions and intentions, human-like, either innocent or malevolent souls to them. We have attached stories to them. The latter is what I am doing when working on this image series.

I’ve been contemplating the role of dolls, puppets, clay figures (like the Golem 🙂 ), tin soldiers and their peers in our culture, as I said that above. I recalled some of their stories. It seemed to me judged by my childhood memories that Pinocchio’s story was sort of a fairy tale. Having read the tale again, my opiniod has slightly changed. The cruel acts that emerge while the living marionette goes through the fires of adversity, would fit perfectly into a horror movie or the toolbar of some middle eastern executioner brigade: hanging, burning alive, dismemberment, flagellation, drowning in water. And then, the transformation of a kid and a puppet into donkeys… Now, that’s a demonic metamorphosis for sure. In spite of the happy ending, this fable displays a nice array of intrigue and cruelty. What could, by the way, Andersen’s poor Steadfast Tin Soldier tell us about happy endings? Well, as I’m sure you know, he and his beloved paper ballerina perish in a fire together when they can finally hug each other… Not a perfect solacement, I guess. It seems that “doll stories” tend to be somewhat grievous. Suffering, misery and sorrow are usual elements of these tales which, like other kinds of tales, are projections of hope and fear. Popular culture’s newer doll stories often utilize deep fear of the unknown (the supernatural, for instance), depicting inanimate figures possessed by evil spirits. Chucky‘s story is a classic one. And Annabelle (whom we may know from the horror movie The Conjuring) still awaits in the Occult Museum founded by demonologists Ed & Lorraine Warren.

So, dear Visitor, do you know about a “doll story” that is not mentioned here? Please share it with us!

A couple of interesting links for your entertainment:

The Adventures of Pinocchio

A nice collection of “haunted dolls”